Are your kids off to uni? 7 top tips to help you survive and thrive


(Based on my article that appeared in Juno Magazine)

‘You’ll be sad when Sam leaves,’ everyone warned me four years ago when my younger child’s departure for university loomed.

I had a good marriage and a fulfilling job. Sam was hardly there anyway, with his busy social life and travel bug. I would miss him, but I was not going to be one of those women who moon over their lost babies.

My first son, Ben had left two years before. I was determinedly bright and positive then: I knew he was going to be happy. I pitied the tear-stained mothers I saw on campus, but me? I was fine. Then across a crowded hall, I saw a Dad cuddling his daughter. At the sight of his loving gesture, a dam broke, releasing tears I hadn’t known were there.

We spent a couple of hours settling Ben in – peering at other newcomers, wondering if they’d be his friends, and trawling round Asda, pointing out the cheap ranges and the urgent need for broccoli.

When we got up to leave him, he stood in the corner of his room, looking anxious. ‘Are you going?’ he said.

The next day a text arrived. After we left, he had met his new flatmates. They were brilliant. He loved it. They had all been up until three.

At home, we adjusted to putting three plates out instead of four (I made the same amount of food – we just ate it). We missed Ben, but he was studying film – his passion since the age of ten. I couldn’t feel negative about him pursuing his dreams.

After a decent interval, we spent a happy weekend visiting him, enjoying a new, more adult relationship. A routine set in of absence, then lovely visits. 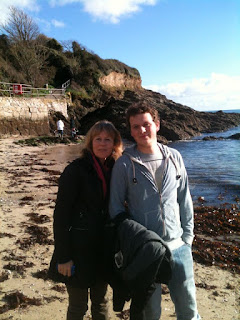 The start of Sam’s first term brought another nervous drive, another Asda shop, another moment of parting. I was ready for the tears this time. On the way home, I retreated deep inside myself as I had after Ben’s birth, adjusting to the shock of motherhood. Now the whole adjustment process was thrown into reverse. Both my babies were gone.

‘You must miss him terribly,’ people said. We did, but we had busy lives, and work, and each other. Eighteen-year-olds, I pointed out, are not all that easy to live with. They crash around at three in the morning and eat all the cheese. The house was quieter now, and tidier. We chattered brightly over the silence.

Having vowed to let Sam find his feet before visiting, we decided to make a date to go and see Ben.  But Ben had a hotel job now. He wasn’t sure when we would be free to see us.

Our coping façade disintegrated. We knew that we loved those weekend visits. We hadn’t realised they were keeping us going.

The house felt deserted – our own company an open wound. I could hardly bear to watch those Gogglebox families sitting down together to watch TV.

If we talked about it, parents with teens at their side joked, ‘Ooh, can we lend you ours?’

‘They come bouncing back,’ others said with a weary air. We stood chest high in a misery that no one understood.

That’s when the dreams began. I would drop a boy off at university and drive home. In his bedroom, I would find him, a baby still, standing in his cot, arms reaching out for me. If everything was all right, no one had told my unconscious mind.

I wrote this tragic little ditty to express it all:

Boys, you are men,
But when I get back
From dropping you off at university,
You are standing up in your cot,
Still needing me.

For all my denial, I was grieving. I began to accept this instead of fighting it. If tears came on my walk to work, I let them. When memories took hold of me, I allowed them to run their course. That end of the kitchen table was where Ben used to sit when he could still fit under that cupboard. That’s where Sam sat in his highchair, shaking his drink over his head.

I began to fret over what my function was, at work and at home. I had lost a role that had filled my life. We had been a family together for twenty years. Now what was I for?

If this is you, I offer you my heartfelt sympathy, and these few things the experience taught me.


7 tips for coping when they fly the nest


2) Try not to dump your emotion on the departing child. They have the right to spread their wings with barely a look back. This doesn’t mean pretending you don’t miss them. But don’t expect them to fix you – that’s not their job.


3) Schedule in a visits straight away – it will be a beacon to aim for. Once you have seen your offspring again, you will feel so much better. Settle into a new routine in which you see them at intervals. Negotiate those intervals – they’ll be missing you too, but give them space! 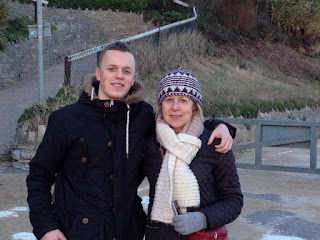 4) Be kind to yourself. Book in some treats and new experiences. Behave as though you are relishing your newfound freedom. Eventually your heart will adjust and this might actually be true.


5) Take stock. What was important to you before you had a family? What is important now? Years of catering for others might have prevented you from wondering. This time of flux can help kick-start positive change.


6) Your child’s new life, full of opportunity and excitement, can make you wistful. What if you could start again? When you come out of the cocoon you formed with your family, the world will still be out there. Explore it – you might thrive!


7) Relish those moments when they need you again. The phone call about toothache, or their bike being nicked. Of course they still need you – they always will! Try not to sound pleased, though. Just sympathetic, understanding and confident that they’ll cope.

As for you, you will survive, and I hope you will thrive!

Posted by Creaky door writer at 04:44