Which childhood books did you love enough to keep?

Last week a local plea went out online for a copy of Nina Bawden’s Carrie’s War. I immediately pictured my Puffin version from 1974 with the cover photo from the BBC teatime series, and sure enough, there it was in the little collection of books I have treasured since childhood. 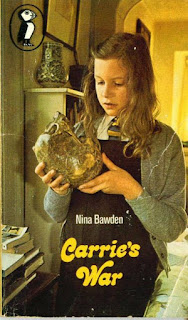 I sank into a reverie of book lover’s nostalgia. There was no need to ponder a list of my favourites –here were twenty-seven browned paperbacks that I had loved enough to keep. Fascinated, I searched through them... 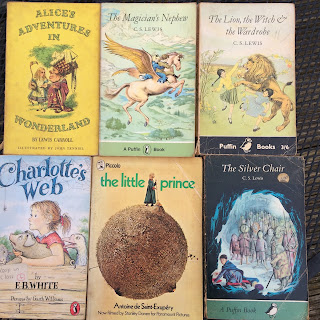 Perhaps keen to discover that I was a precocious intellectual, I preened myself over these: Alice’s Adventures in Wonderland and The Lion, the Witch and the Wardrobe. Remember relishing a book so much that you didn’t want to be out of it? I continued on to The Silver Chair and The Magician’s Nephew, searching for – but not finding – a repeat of that first high. Then there was Antoine de Saint-Exupery’s enchantingly sad The Little Prince, and E.B. White’s heart-rending Charlotte’s Web.


Books Off the Telly 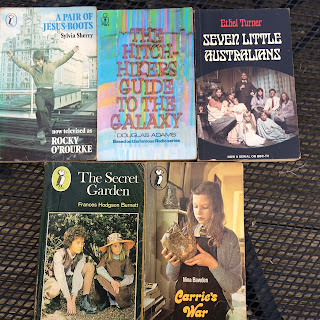 I was surprised to find that this was such a large category – but then I come from a telly-devoted generation, brought up in front of an array of brilliant 1970s children’s series – and clearly they encouraged my reading. Carrie’s War was one of these – I have fond memories of the TV version from when I was nine.

I also found A Pair of Jesus-Boots, a 1974 Puffin that I bought after seeing the series Rocky O’Rourke, about a slum-dwelling Liverpool lad. Already I liked my fiction on the gritty side. I discovered The Secret Garden through a teatime adaptation, and Ethel Turner’s Seven Little Australians, written in 1894, was brought to life for me by the BBC in 1973.

In 1979 I found the TV version of The Hitch-Hiker’s Guide to the Galaxy funny, if a bit irritating, but I enjoyed Douglas Adams’ book much more.

A haunting BBC series of Tom’s Midnight Garden was the taster that led me to the book. A few years later, Philippa Pearce did a talk at our school. She said that being a writer was like having English homework every night of the week. ‘Don’t do it if you don’t have to,’ she said. ‘But if you have to – good luck.’ I already knew that I had to. I never forgot. 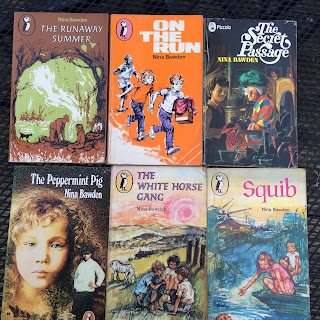 At around the time of Carrie’s War, our teacher, Mrs Skett, read The White Horse Gang aloud to us, and I became hooked on Nina Bawden. She was the kind of writer I wanted to be: her child characters were vivid and believable, their adventures rooted in the real world. My collection includes The Peppermint Pig, The Runaway Summer, On the Run, The Secret Passage, Squib and The White Horse Gang. I read others from the library. 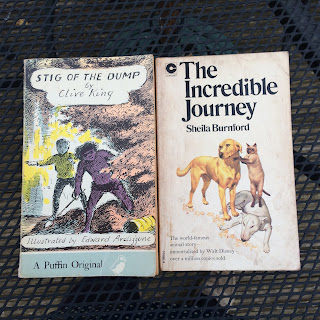 Stig of the Dump appealed to my fascination with the idea of the primitive within us, and of a life ‘in the wild’. I must have overcome my fear of dogs to love The Incredible Journey – though there was also the cat character to draw me in. 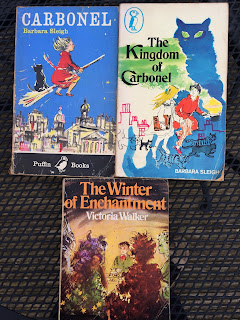 I had forgotten Barbara Sleigh’s Carbonel and The Kingdom of Carbonel, but memories rushed back of these wonderful tales of a night-time world of cats on the rooftops. There was a potion that allowed a little girl to understand the cats’ language, found in those oversized bottles that used to advertise chemist’s shops. I remember peering at the one in Boots... The Winter of Enchantment by Victoria Walker had a similar theme of a child escaping an unpleasant reality to discover a world of magic. 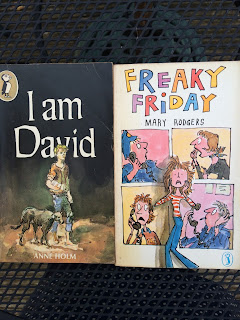 The final four show how my taste was varied, then as now – there’s I am David, about a Jewish boy who escapes from a concentration camp. I am still willing to be challenged and disturbed by what I read. But there’s also Flicka, the story of a Wyoming ranch boy and his beloved horse – I remember relishing the horsey sentimentality and scenes of Mom making doughnuts. There’s early teen fare: Freaky Friday, about a thirteen-year-old who swaps places with her mother, but also Eleanor Atkinson’s Greyfriars Bobby which was hard work, but worth it, with a lot of pages spent in a graveyard and a Scottish dialect to grapple with, which may have prepared me for A Clockwork Orange.

But now we’re getting onto teenage reading, which is a whole other subject…

I’d love to hear from you if you remember any of these books or series, or if you have a treasured collection of your own? What books were landmarks in your childhood reading journey?

Fear in the Woods

In Unspeakable Things, Sarah moves into her abandoned childhood home, in the middle of deep, dark woods. The woods seem creepy from her first walk on moving in day:

‘A sudden crackling sound made her whip her head round. What’s that? Just trees and fraught stillness in the greenish light. She turned back to the bush and began to force her way through, pushing branches aside. They whipped into place again behind her.’

When her uncle turns up on her doorstep, woodland debris gusts in with him, and she quickly shuts the door on the hectic darkness.

When he reveals a dreadful secret to her, they are in the middle of the woods. His revelation is punctuated by the nasty chattering of squirrels.

Later, eight-year-old Mary is left alone in the pitch-black woods. Her brother has told her that demons live there.

‘She called, “Daddy! Daddy!” in case he was hiding behind a tree. But there was no answer. Which way was home in all this blackness? Something swooped at her and flapped in her hair and she screamed and hit out, remembering demons…’ 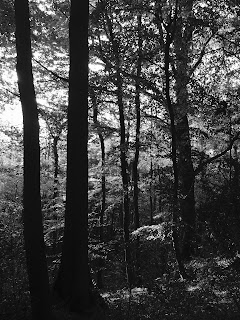 You’d think I hate woods, wouldn’t you? And yet I love them! I was brought up on walks in the Kentish countryside, from the time my little legs could carry me. Perhaps because of these happy memories, I walk into a wooded place and my heart finds peace. I walk alone in our local woods and have never felt safer. 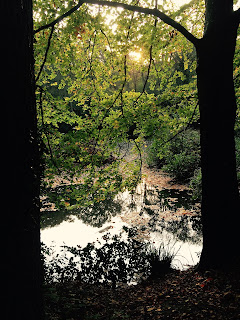 Jon is doing Forest School training and goes off once a week to make fires, paint mud faces on trees, coppice and whittle things and generally revel in this fabulous environment. I picture him on these days as a forest sprite with a hat made from an acorn cup. This past weekend he took me to one of the sites – a wonderful, unspoilt stretch of heath and ancient woodland that no one seems to know about – on a beautiful Sunday afternoon, we had it to ourselves. 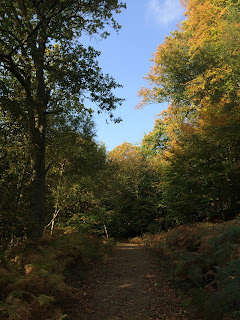 It was idyllic. The chestnuts are so abundant this year that with every sigh of the wind, they thumped to the ground around us and bounced, fat and glossy, from their spiky shells. We spent a wonderful afternoon walking under a canopy of autumn colours and narrowly avoiding chestnut-related head injuries. 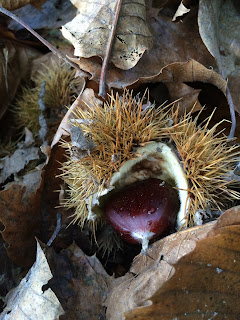 I love woods. So why do they haunt my novel, the heart of darkness into which Sarah unwittingly wanders?

Of course, sudden inexplicable fear in woods is the origin of the word ‘panic’, because the ancients believed it was caused by the god Pan. From the dawn of culture to the Blair Witch Project, woods have been used as a sinister setting, alive with unseen threats and evil forces. 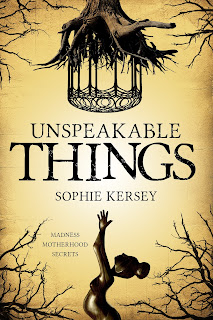 In Unspeakable Things, Sarah must explore and confront the unknown – and maybe that’s what the woods are there for. Enticing at first, they close in around her, fraught with danger. Will she find her way out? Or will demons get her?

Unspeakable Things will be published in January.
Posted by Creaky door writer at 03:19 No comments:

A Magician's Sleight of Hand - Julie Myerson's The Quickening 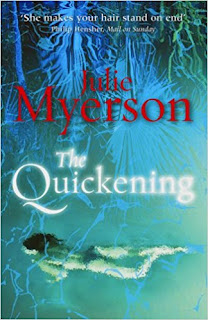 I read this Hammer horror novella on holiday and found it a compelling page-turner. Picking it up again to review it, I read the entire book again and realised how very clever it is.

In this haunted honeymoon story, Myerson uses a magician’s masterly sleight of hand in order to distract us from what’s really going on. Newly pregnant, Rachel has been bulldozed into a quick wedding and a honeymoon in Antigua. On the way from the airport, the driver bizarrely says that her husband is on the island. ‘Not now. Always. He cannot leave.’

This echo from The Shining (You’ve always been the caretaker. I should know. I’ve always been here) sets the tone, and when they arrive at the resort, even the words, ‘Rachel held the towel to her wrists, her throat,’ made me see her stemming blood, rather than enjoying scented towels.

Myerson’s staccato style, without inverted commas, makes the writing feel tense and fast-moving. Rachel’s point of view is edgy from the start – the empty suitcases look ‘depressing’; she sees a figure on the beach and shivers. Every tiny observation is used to ramp up the tension.

The real horror of the piece, however, is Rachel and Dan’s marriage. We’ve all known a Dan – he’s the partner of a friend of yours and none of your women friends can stand him. He’s a foul-mouthed, irritable loser, a liar and a bully. When Rachel is first upset by a horrible ghostly encounter, he is drunk and bad-tempered. ‘What now?’ he says, and then drags her into his lap. His lack of sensitivity and sudden, selfish advances make us see him as a sexual predator rather than an amorous newly-wed. When she wants him to feel the baby moving, he can’t drag his eyes off the cricket. Most food nauseates Rachel and Myserson brilliantly uses descriptions of Dan gobbling with gusto to make us feel revolted on her account.

The depiction of the haunting and the way it overwhelms Rachel is skilfully observed, but what is truly masterful is the way Myerson uses our suspicion of the odious Dan to distract us from other possibilities in the story. Reading the book a second time, I realised that I had taken in details that screamed of someone else’s guilt, but brushed past them when Myerson, with expert timing, threw in another despicable facet of Dan’s character. And I’m not giving away the ending here, because Dan is also a guilty man.

I write psychological suspense stories myself, and I can only admire Myserson’s clever ruse. Rachel is pregnant and has been rushed into marriage. She is partially in denial about the nature of her relationship and later reveals that she suffers from anxiety. This all makes her vulnerable and unstable in our eyes. The ghostly events and real murders on the island destabilise her further so that we accept gaps and inconsistencies in her point of view, which only serve to make us more fearful for her and her unborn child.

The only downside to this is revealed in other reviews – many readers are irritated by Rachel as a  hapless victim, always spoiling the holiday fun with her fainting fits. It is true that this could detract from our identification with her, but it is part of the book’s masterplan, which certainly worked on me.

Read it twice – once to be taken in and a second time to admire how brilliantly Myerson achieved this.

Posted by Creaky door writer at 07:58 No comments: