Why would she do that? Motivation in The Handmaid's Tale 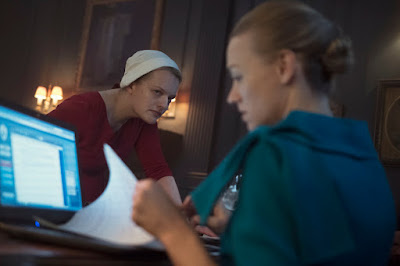 I am addicted to Channel 4’s The Handmaid’s Tale.

If you can get beyond the harrowing first episode of Season 2, the rewards are rich. The new series is as thought-provoking as Margaret Atwood’s novel.

Margaret Atwood made a rule when inventing Gilead: she wouldn’t show anything that hasn’t happened somewhere in real life.

Now I understand why the series resonates so powerfully: it echoes authoritarian regimes all over the world, from the slave plantations of the Deep South to Nazi death camps to Islamic State. These echoes are the reason we believe in Gilead. This dystopic vision makes us look at our world: what political realities do we face today that we wouldn’t have believed five years ago?

The writers have done an excellent job of moving beyond the novel’s plot, melding details that were in the book but not in first series with the backstories of Offred, the Waterfords and Moira.

The plot is gripping, with Offred always in jeopardy. Personal and political relationships change in fascinating ways from one episode to another. The storyline makes us ponder profound issues in the real world. Is terrorism ever justified? How do the oppressed suffer when power is destabilised? What does work mean to women?

But something has niggled this writer and editor! Because at times character motivation has been sacrificed for the sake of the clever plot and themes.

I was delighted to discover that Offred was an editor – now I can relate to her even more! And I loved the scene when Serena Joy and Offred work together, writing things for the injured Commander Waterford so that he can protect his power from his hospital bed. Handmaids are not allowed to read and write, but Offred is empowered when she is given a pen. The two women glimpse an alternative life in which they might have been colleagues. We feel how much they both miss their lost working lives.

It is riveting and powerful.

But what about motivation?

Serena Joy has to protect her husband’s position and her household, and she will bend the rules to do it. I get that.

But why would she commit a crime by involving Offred?

We see Offred handing back a draft, suggesting swapping the order of two paragraphs. But Serena Joy has been instrumental in the movement that has swept to power in Gilead. She has been a powerful speaker and the brains behind some of their policies. Why would she risk everything to secure Offred’s editing services?

Look, I’m an editor – editing is vital! Don’t even think of publishing anything without it! But with the enforcers of a reign of terror running amok in the streets, would you commit a crime with the handmaid carrying your baby, just to have her reorder your paragraphs?!

I remain addicted to The Handmaid’s Tale, but I couldn’t let this go.

Do you struggle when a fictional character does something that leaves you thinking, ‘But why would you do that?’

Posted by Creaky door writer at 00:39