Mothering Is Not What It Used To Be 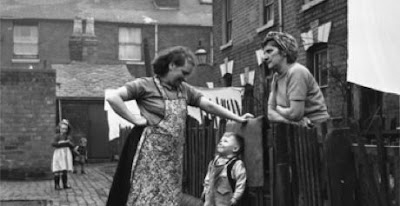 Motherhood has changed. While doing some background reading for my next novel, I came across Alan Garner’s memoir of a wartime childhood, Where Shall We Run To? and this charming (!) recollection of his parents’ routine:

My father finished work at dinnertime on Saturday each week. And after dinner he nearly always went to watch football in Manchester. Then he came back for his tea, washed and shaved, put on his suit and went to the pub. Then he came home, went to bed and slept until dinnertime on Sunday.

On Sunday morning my mother got up and cooked the Sunday dinner. She roasted a joint of beef with potatoes in the oven, and she boiled more potatoes, and cabbage and carrots and Brussels sprouts. And she made gravy and Yorkshire pudding, and a rice pudding with a brown skin on top.

Twenty minutes before dinner was ready, my mother knocked on the beam below the ceiling with the handle of the carving knife and my father thumped back on the bedroom floor with his foot. My mother served the plates to the table, which had a clean white cloth on it, and my father came downstairs, sat in his chair and ate his dinner. He mixed the rice pudding with the gravy and it looked horrible. I sat with him and had bread and jam, and my mother sat on the arm of a chair by the fire with her plate on her knee. No one talked.

After dinner, my father read the News of the World in his easy chair by the fire and went to sleep until teatime. My mother cleared the table, took off the white tablecloth and put on the blue sateen one with tassels, and washed up the dirty pans and dishes. Then she went to bed to lie down, and I read my comics because I wasn’t allowed to play out on a Sunday.

After tea my father went to the pub and my mother and I listened to the wireless and played cards.

Whatever we’re doing this Mother’s Day, I hope it is less exhausting than this and that there will be absolutely no mixing of gravy and rice pudding.

Posted by Creaky door writer at 06:12