The Apprentice – You're Fired 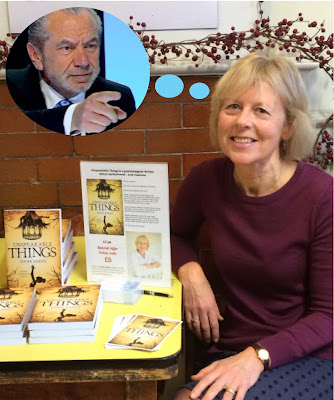 This Saturday I was on the Meet the Authors stand at Penshurst Christmas Market doing my first ever face to face sale of Unspeakable Things. I wasn’t speaking, blogging or posting – I was sitting with a pile of paperbacks to sell to the public.

My ex-boss always says that publishing is about creating books that people want to buy. And as a self-published author, you can’t just be a wafty creative type – you have to sell.

I started with an inferiority complex. The lovely author I took over from, Deborah, had spread out an array of published titles. She has an agent who moved to America and found her deals there. She wrote her most recent bestseller 'as a joke' and then ‘found that it was taken seriously.’

‘Better than the other way round,’ I quipped through a tightening smile.

Perhaps recognising a rabbit in the headlights, she asked all about my book and bought a copy before she left. Bless her – my nerves settled. At least I’d be able to say I had sold one.

My fellow stallholder was also friendly and frighteningly successful – he had written two bestsellers about Churchill. For the first fifteen minutes of my two-hour slot, I watched him sell three copies while Unspeakable Things lay unnoticed.

And why wouldn’t people see his books, think of someone they knew who was interested in Churchill, and snap up a copy for Christmas? He was relaxed and confident, able to chat about a popular subject with a mix of authority and gossipy titbits.

I was beginning to feel like the candidate on The Apprentice who can’t sell anything and gets fired. 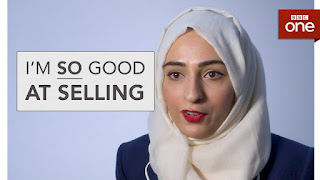 I had watched Deborah enthusing about her book, its glowing reviews, the publisher wanting a second, the delights of the setting. I needed to shake off my feeling of failure, up my game and wax lyrical about Unspeakable Things.

Unfortunately I couldn’t remember a single thing about it. I read the cover as last-minute revision. Something about motherhood and madness.

‘It’s for someone who likes a dark, creepy thriller,’ I began to say to people who showed an interest.

Now there is a divide between people who can’t resist this kind of thing and those who avoid it like the plague, and you can’t tell just from looking at them. A few festive market-goers shuddered as if I’d said it was a story about hurting kittens. Perhaps they all had mad mothers. Or were mad mothers themselves?

After one couple bought a Churchill book, the husband looked at mine with benevolence and said to his wife, ‘What about this one for so-and-so?’ I didn’t hear her disdainful reply.

My smile was becoming frozen. You see this happening to Lord Sugar’s young hopefuls, and from the comfort of your armchair, it is very entertaining. 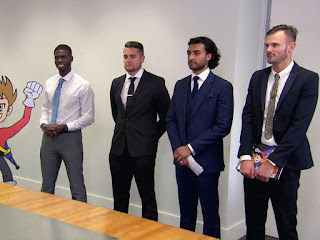 After a passer-by stalked away from my offer of dark, creepy thrills, I got the hang of spotting those who were genuinely interested and throwing out a comment to entice them. I sold another copy and restrained myself from throwing my grateful arms round the buyer.

The hall remained busy and money was clearly no object. I had decided beforehand to reduce my usual price of £7.99 to a special offer of £5. Now I saw that people had brought enough cash to do some serious Christmas shopping while supporting local traders.

I began to suspect that my novel was the cheapest thing at the market.

A stallholder opposite explained why she had stopped selling a particular item. ‘They took hours to make and I could only sell them for a fiver.’

Unspeakable Things took me twenty-three years to write. I was literally underselling it.

In the end I found my readership and found myself selling and signing copies. My smile was now genuine as I remembered that many people have enjoyed the novel, and it is actually worth buying. I left with an envelope full of fivers and some really valuable lessons.

To begin with there were shades of I’m a Writer – Get Me Out of Here. Selling in a market is not my natural environment. But if you publish your writing, your books are your product, and if you can’t sell your own product, you shouldn’t be publishing.

So I wasn’t the candidate who couldn’t sell anything, but Alan Sugar would not have approved that I had sold at a knock-down price in one of the South-East’s wealthiest villages.

Thank you to the organisers of Penshurst Christmas Market! You were kind, welcoming and willing to stretch the boundaries of your village to include me as a local author. I had a lovely afternoon there in the end.

But on The Apprentice, I would still have been fired.

Posted by Creaky door writer at 06:39

Email ThisBlogThis!Share to TwitterShare to FacebookShare to Pinterest
Labels: Alan Sugar, author self-promotion, Christmas market, how to sell your novel, I'm a Celebrity Get Me Out of Here, self publishing, The Apprentice