Inspiring mothers: are you buried in motherhood?

Let’s face it, we get buried in motherhood. Little people’s needs and our instinctive responses are overwhelming. For a season, we lose ourselves. Baby cries, we leak milk. Child wails, we make it better.

And if anyone thinks these responses are an over-reaction – think again. The human race would die out without them.

The weight of responsibility – not to mention the drudgery – can be crushing for a woman.

Of all the mothers in my novel, Unspeakable Things, Deb is the buried one. Previously a high-flying nurse, she now has a toddler who won’t go to Daddy. We meet her trying to throw together a dinner party for her best friend, Sarah.

Now that her days were filled with the mind-numbing chatter of the nursery run, it lifted her spirits to be with people who had known her before.

When Sarah gazes at her jumble of family memorabilia, Deb calls it her ‘dusty old mess.’

‘It’s not a mess. It’s lovely. Like a museum of you.’
‘Museum’s about right. I think I’m becoming extinct…’

Is there a you inside that rarely sees the light of day? Is some essential spark of who you are being snuffed out by the burden of being Mum?

Do you blame yourself for losing it but also feel guilty because you yearn for it?

This weekend I went to a party and met a young mother. She was singing in a wonderful band and her talent just shone. You could tell that she was both gifted and well trained, and I wasn’t surprised to hear she had been to drama school. She was fitting in singing with bringing up children of three and six.

Preparation for a gig, she told me, involved vintage costume and make-up, and took hours. But how do you explain to small children that mummy is unavailable? ‘And then there’s the marketing,’ she said. ‘I know I should be doing more – there’s Facebook and Twitter and Instagram and everything, and I just can’t seem to get round to it…’

I had a powerful sense that she felt she was failing, and yet what I’d seen onstage was someone radiant and inspiring. 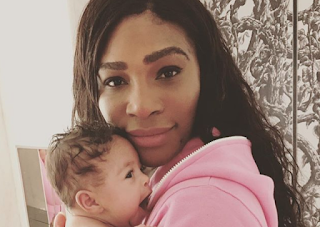 We hear that Serena Williams is struggling with the demands of motherhood. Serena is a world-beater, brought up to give her all and reign supreme. The woman won the Australian Open when she was four months pregnant! And yet four months into motherhood, she has withdrawn from the tournament. Why?

Because Serena does not enter a tournament unless she knows she can win it.

Mothers, don’t be so hard on yourselves! You’re finding it hard because it IS hard. But it won’t always be like this.

You will resurface, and when you do, take stock. Is there a part of you that’s buried? A dream? A talent? An idea for a business? Something that connects you with the you inside, who has curled up and gone quiet in the noise of family life?

Do something for that essential you, the one from before. It might be an hour spent crafting or writing. It might be jotting down plans. It could be teaching or studying, or just talking about politics. Whatever you achieve is a victory.

If you have the drive of a world-beater like Serena, you might need to give yourself time. Being realistic does not mean letting go of your dreams.

Sometimes being a mother reconnects you with your childhood, and who knows what yearnings you’ll find there? Perhaps not the same ones that launched your career. Motherhood can prompt you to reinvent yourself.

And if you do unleash that inner you and take to the stage, don’t tell yourself you’re second-best! You’re a wonder, an inspiration, like the singer who lit up that venue last night.

You won’t be ‘having it all’ in this season of your life, you’ll be muddling through. But in years to come, as the impact of motherhood eases, your time will come.

I hope you flourish.

Posted by Creaky door writer at 07:37