Family Secrets: The Terrible and the Wonderful 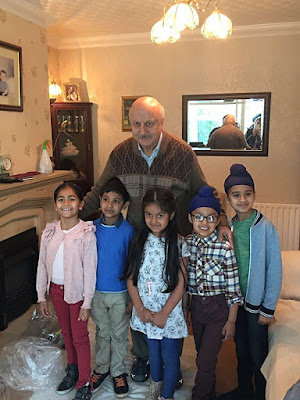 Family secrets fascinate me – they are at the heart of my writing. So I was a captive audience for the BBC’s drama The Boy With the Topknot, based on the memoir by Sathnam Sanghera.

Sathnam is a rather arrogant, westernized journalist, who goes home to Wolverhampton to tell his family that he wants to marry an English girl. In the bosom of his Punjabi Sikh family, he can’t face breaking the news.

He then discovers that his father has for years been a paranoid schizophrenic and only his mother’s management of his medication has kept him out of a psychiatric ward. His older siblings have always known, and dismiss his shocked reaction. Torn between the new life he wants and the explosion of the old life he thought he knew, Sathnam unravels. He asks strangers questions for a living, but he has never investigated his own family.

How could he not have known?

This might seem bizarre, but it rang utterly true to me. Families conceal things, or don’t mention them; things that peek out from the heart of often-told stories, but are never asked about, never questioned. I know this because I hoard such things, gathered from people I know or from the media. People discover that a parent was a spy, or a Nazi. I know someone who was in her thirties when she found out at a family gathering that her Dad, now dead, was not her real father. It came out through a casual comment from an in-law; the whole family knew except the woman in question.


In Unspeakable Things my heroine, Sarah, knows nothing about her mother, who died when she was four. Pregnant and newly inquisitive, she visits the abandoned family home with her husband, who asks why her father moved them away.

‘I don’t know. He didn’t say.’ Dad had not talked about any of it. She didn’t even remember looking at old photographs with him, and wondered now why they had never pestered him about their dead mother, their abandoned first home. But during his life it had seemed unthinkable. Did they hesitate to test that resolute strength of his, in case it crumpled?

Families are different from other groups. They’re home to our most profound relationships, our dearest loves and deepest resentments – and yet they need to operate on an everyday level. Everyone needs to get fed, clothed and off to school or work; to rest, mooch around together and sleep. We are not our outward-facing selves in our families, the way we are with our colleagues and friends. They see us grumpy or distracted, picking our noses, grunting responses: the real people who emerge when we’ve shut the door on the outside world.

Things go unsaid in families, both good and bad. I read an article by a man who decided not to save a eulogy for his father’s funeral, but to tell him his feelings for him while he was alive. He did so. It was awkward. He wasn’t sure if he regretted it or not.

There is a reason we don’t do these things. Huge feelings and shocking revelations might tear apart the everyday functioning that makes up family life. If someone at a family gathering says something profound, we are just as likely to shrug or squirm with discomfort.

Older siblings, like Sathnam’s, sometimes patronise younger ones and pull the wool over their eyes. It becomes a habit in childhood and they can’t shake it off later. At fifty-three, I sometimes still get a whiff of it: that sense of being the youngest who can’t be taken seriously. When she protests or tries to make her mark, she’s just showing off.

There are terrible things in families, and as a writer of dark fiction, I dig them out. Secrets concealed and secrets discovered form the darkness behind the suspense.

Sathnam’s mother won't  talk about her husband’s illness, which came to light when she was a young bride in an arranged marriage. Family friends fill Sathnam in, and then ask him about his sister. Suddenly, Sathnam knows that she is a schizophrenic too – and that the day she was sectioned as a teenager was the day he turned his back on his family, cutting off his Sikh topknot and throwing in his lot with the western world.

Back in the present day, Sathnam’s mother’s insistence on arranging a marriage for him threatens his chance of happiness, and her obstructiveness when he questions her is maddening.

But the story’s conclusion is touching. Sathnam realises that his family’s secretiveness has made him what he is. He has made it in life because of them, not despite them as he thought. ‘I always thought you were happy,’ he tells his Mum. Her strength in concealing the painful truth has given him the happiness and confidence to succeed.

My second novel The Year of the Ghost confronts all the family failings that infuriate us: the things they won’t talk about, the awful things they conceal. The stress, pain and anguish this causes come to a head during the annual holiday – when there’s a ghost in the holiday home and nobody knows who it is.

But I hope I have touched on something Sathnam discovered. There are wonderful things in families, – things we don’t talk about either. The Year of the Ghost delves into secrets and lies, but it’s a love song to family as well.

Posted by Creaky door writer at 09:22