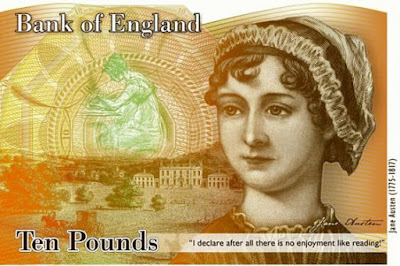 All authors these days must be beacons of self-promotion – but on the day that Jane Austen’s appeared on the £10 note, I made a haunting discovery. The original creaky door writer, who was famously loathe to admit to her writing habit, is more active on Twitter than I am!

And not only was she a reluctant self-publicist – she also died 200 years ago.

On Radio Five Live Breakfast this morning, Rachel Burden said that Austen would have been excellent at Twitter. George Riley, who doubted it, tried fitting her most famous quotes into 140 characters and found them wonderfully tweetable.

This spoke to me, as an editor, of the joys of brevity – there are very few raw creative sentences that wouldn’t work better shorter.

I Googled ‘Jane Austen, Twitter’ and was impressed by how much the author tweets from beyond the grave – this is just one of her many accounts.

If even dead authors are this active on social media, I am going to have to up my game in the run-up to publication of Unspeakable Things which (did I mention?) is coming soon.

And a huge hurrah to all those who campaigned to have Jane Austen on a banknote. Let’s not forget that for championing the cause, MP Stella Creasey became the target of misogynist social media trolls and was threatened with rape (see Guardian article).

Austen probably never dreamed she would end up on a banknote, but she did dare to suggest that women should be educated in more than pretty accomplishments designed to attract husbands. Go, Jane! Go viral.

Posted by Creaky door writer at 07:42