Top Tips for Revising Your Novel 2: Get the Characters’ Motivation Right

Welcome back! I had a creative consultancy assess my novel in progress, psychological thriller,  Unspeakable Things, and here I continue sharing the top tips that I found most useful. Editing and revising are hard, but vital, and we all need all the help we can get.

In my assessment, the consultant brought up the tricky issue of motivation. She wrote:
‘There is some dodgy or non-existent motivation. Sometimes the characters appear to do things because you need them to, rather than because they need to. The effect to aim at is the other way round: the characters are the emotional heart of the book and the plot grows out of their longings, virtues and shortcomings. Writing a plot and forcing the characters through it produces characters who aren’t psychologically coherent or believable. If the characters don’t feel believable, the reader can’t make emotional connection with them, and although Gothic has elements of stylised fantasy, it also runs on emotion.’

I wonder if your work in progress might suffer from this problem? The consultant went on to say, ‘You’ve written in a state of creative excitement, a stage common to many writers, where ends are not always joined up... some of the non-sequiturs haven’t yet become visible to you, despite rewriting. This is where another person’s beady eye on a work can really help’.

She then detailed some of the points in my novel where motivation wasn’t convincingly explained, which I won’t bore you with here. The problem was partly related to Tip 1 from my previous post: the characters were not adequately fleshed out and developed, so their motivation was left unclear or taken for granted. Other problems were more related to the plot, which needed adjusting to become more believable.
The consultant’s central point was crucial: if the characters and their motivation are not believable, the reader will not engage with the plot. In a way, the more outlandish the plot, the more we need to be led through it by well developed, consistent characters. In a thriller full of secrets, shocks, surprises and elements of Gothic horror, it is all the more necessary for us to experience the journey through the eyes of characters we believe in and relate to.

Reading this, I was reminded of one of my favourite films, The Sixth Sense, written and directed by M Night Shyamalan. The film has a plot that could leave the sceptical filmgoer scoffing and unconvinced: the boy in the film sees dead people, all around him, all the time. They don’t know they’re dead. A psychiatrist is trying to help him, but meanwhile the boy is constantly visited by terrifying and dangerous ghosts. Despite this potentially unconvincing premise, the film so convinced me that after I saw it I was unable to go to the toilet in the night, despite having drunk a bucket–sized drink in the cinema. My disbelief was so thoroughly suspended that I believed with all my heart that my hallway was thronging with dead people. 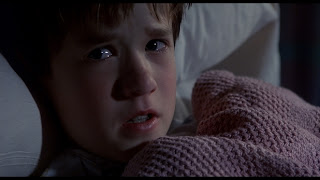 What I love about this film is the writing. It is thoroughly consistent and believable, because the characters are fully developed and their motivation is clear. At the beginning of the novel we see that the mother and son have been having a hard time. The mother is newly single and grieving for her own mother. Although she is loving and caring, the message she give her son is that she needs him to be doing well. She can’t cope with strange happenings or his reaction to them. She just needs him to be OK. The boy has taken this on board. Although he suffers appalling terrors, he knows he needs to appear to be OK in front of his mother. If this were not developed so well in the writing of the two characters, the filmgoer would just say, ‘But why doesn’t he just tell his Mum?’ The motivation would be unclear; the characters would not be believable, and the suspension of disbelief needed to go along with a horror plot like this would come crashing to the ground, and the movie with it.

M Night Shyamalan has said the film is about communication. Towards the end, the boy has received enough help and encouragement from the psychiatrist and even from some of the apparitions that he feels strong enough to tell his mother the truth. ‘I’m ready to communicate with you now,’ he says, sitting in the car with her, stopped in traffic by an accident. It seems an oddly stilted statement for a young boy to make to his mother; but this is no ordinary young boy. The character’s unusual sensitivity, maturity and level of empathy have been carefully established throughout the film, so that the phrase rings true. So does the fact that the boy has recognised a perfect opportunity to tell his mother his secret in a situation in which she will believe him. He tells her that the victim of the accident, a cyclist, has died, but the boy can see her; she is standing by their car window. With this truth out in the open, the boy is able to give his mother a message from her own mother that could only come from her. 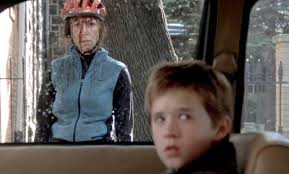 I’m ready to communicate with you now. My message is this: get the characters’ motivation right, and your readers will believe almost anything you tell them. Good luck with your rewrite!
Posted by Creaky door writer at 10:05