Me and Kate Atkinson 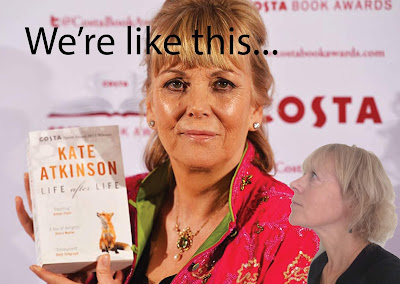 This summer I plucked up the courage to take a few copies of Unspeakable Things into a local bookseller. I mean an actual one – not a coffee shop or a secondhand bookshop.

I had been warned the manager was dubious about self-published books, but I breezed in with fake confidence and assured her I would advertise it through my vast social media following. To my delight, she agreed to try it out for three months (thank you Fiona at Sevenoaks Bookshop!)

While there, I bought a ticket for a talk the bookshop had organized by author Kate Atkinson.

I love Kate Atkinson. I loved her duo of wartime-set novels, Life after Life and A God in Ruins so fervently that I made my Dad read them too, implying that I wasn’t really interested in talking to him until he had done so.

When I turned up for the talk three months later, I felt like a tiny, unworthy fish in a huge pond dominated by the brilliant likes of Kate Atkinson. 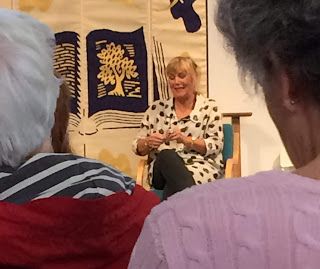 To make things worse, I popped into the bookshop beforehand to discover that no copies of Unspeakable Things had sold. Fiona was busy with the real author’s talk so I told the salesgirl I would pick up my unsuccessful efforts later.

As the crowd gathered, I got chatting to a fellow admirer of Kate Atkinson and commented that you could assess who her readers are by looking round at the audience – for instance, most of us were women.

Now, this blog was my first big step out of the closet as a writer. Since Unspeakable Things came out in January, I am happier to declare myself.

So I replied that I am interested in such things because I am a writer, though of course, not a proper one like Kate Atkinson. She kindly she asked about my book and I told her a bit about it. I always have some postcard-sized ads with me for just such occasions, so I silenced the ‘don’t show off’ voice in my head and gave her one.

Most of us had bought a copy of Kate Atkinson’s new novel Transcription in the lobby, but this woman had decided to buy it later at Sevenoaks Bookshop and to choose two more novels to take on holiday.

And guess what? She promised to buy Unspeakable Things. It would have been lovely to chat to her anyway, but now my three-month trial had been saved at the eleventh hour by this encounter at the feet of Kate Atkinson.

The proper author came on, and her talk was great and Transcription looks excellent. I still felt utterly unworthy, but as she spoke I felt a tingle of recognition that said, yes, I get it. I am a writer too.

When it came time for questions, a woman asked, ‘Your novels seem to flow so creatively, as though they just grow organically. Do you do any planning at all?’

Of course she does, I thought. She’ll plan meticulously. Writers don’t commit to a shopping list without working out how it will end.

Kate Atkinson smiled. ‘I’m delighted you think that my novels just flow organically,’ she said. ‘But the truth is, I plan everything meticulously.’

And it turns out we have something else in common. The plot for Transcription came to her when she was doing research for her other wartime novels and came across the story of a real spy from the era.

My new novel The Year of the Ghost is partly set in the war years. While researching the history of child evacuees, I came across some extraordinary facts and stories. Perhaps the effect of wartime propaganda, which encouraged people to see Operation Pied Piper in a positive light has lingered on, meaning that its darker side has not been much explored.


One of these stories, of evacuation with loving hosts, followed by the discovery of a shocking family secret, inspired a major plot line of The Year of the Ghost.

I’m not a million-selling author or a multiple prize-winner on a prestigious book tour. But I am a writer. I plan meticulously. I find inspiration from research. And apparently I promote my book wherever I go!

So yeah – me and Kate Atkinson. We do that.

Posted by Creaky door writer at 03:50