The Child in Time – the Power of the Lost Child Story

My Dad said he couldn’t face an hour and a half in a story in which (spoiler alert!!!) a lost child is not found. I agree, that is a harrowing prospect. But The Child in Time is not about the search for the child in the way that the first series of The Missing was. It is a quite different exploration of loss with its magical suggestion that time might not the be linear thing we think it is.

In this story, the man who has lost his daughter looks through a pub window in a place he has never visited, and see his mother as a young woman. He later learns that she was in that pub years ago, anxious about telling his father that she was pregnant with him. She looked out of the pub window and saw the baby inside her as a little boy, looking in. This mysterious double time-slip gives the man a strange kind of hope: that his daughter, although lost to him in a very real sense, is still ‘out there’ somewhere in time, and his connection to her will never be lost.

Why do these stories resonate so much with us? Of course the cases of Madeleine McCann and Ben Needham are etched on our consciousness – they are every parent’s nightmare.

Most of us have never gone through the agony of losing a child, and our sympathy for those who have is endless. What we experience CANNOT be compared to this. But lost child stories tug at our hearts for a different reason. If our children have grown up, or even just grown bigger, we have lost the little ones they were.

If your child is now 6 foot tall – and even if he is sitting beside you on the sofa – you have lost the child that he was. That creates an ache that we try hard to ignore. It’s irrational – the child hasn’t gone, he has grown up. You have an adult to love in his place. 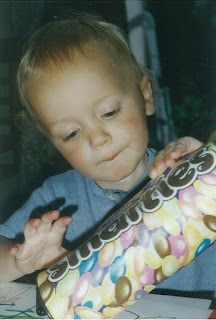 But the ache won’t be denied, and Facebook has a way of socking us in the heart with it. My son was 22 this week, and up popped one of those old posts from yesteryear: a picture of him as toddler. A friend posted another picture of her child and both of mine, all tiny and gorgeous in her garden. Nostalgia is a sweet pain, but it hurts nonetheless. I have two adult sons who mean more to me than anything, but those little boys have gone forever…

Unless time slips, as in The Child in Time. And time does slip, doesn’t it? We get those Rip Van Winkle moments, like when we drop our children off at university, and can’t believe it’s not us going.

And as in the novel, the child you remember hasn’t gone completely. He lives on like a Russian doll inside the adult you love now. And the curly-haired toddler I was lives on, buried inside my middle-aged self. At times perhaps you can glimpse her.

Maybe this is why these stories haunt us.
Posted by Creaky door writer at 08:28