Well, I think we’re all agreed that life is way too busy as Christmas approaches, so I will keep this short. No news from the Mslexia novel competition, which means either 1) I haven’t been long-listed or 2) they have been overwhelmed with entries and haven’t finished the long-listing process, which I am assured is what happened last time. If it turns out to be 1), I need to rethink, because I have been pinning a lot of hopes on the competition and putting off working on a good query letter while I wait to see if the eggs in my Mslexia basket are going to hatch.

In the meantime, I have been working on a short story in the hope of getting it published and gaining some writing credits for that query letter I am putting off writing. I was really struggling to get down to the task. It seems much harder to feel motivated when you are starting afresh on a short story as opposed to sitting down to a novel you are deeply engaged with.

Then I found something that has really helped, a post by Emily Benet giving 7 Tips for Writing Faster: http://emilybenet.blogspot.co.uk/2013/12/how-to-write-that-novel-faster.html
Have a look, not only if you want to write faster, but if you are struggling to find the motivation to write at all. Emily advises deciding on a writing goal for the week, whether it is a word count, a number of chapters or just finishing a section. Then she says to set a realistic work count: ‘It doesn’t matter if it’s only 100 words, what matters is that it’s achievable so you won’t be put off, and you will feel happy when you’ve completed them each day.’ This is the tip that has really worked for me. I decided on 250 words because that really isn’t many, but it can feel like real progress in a short story. Emily also advised to write ‘draft’ at the top of the page, because then ‘it’s okay if your writing is terrible; at this point you just want to get the story down. Don’t worry about editing until later.’

This new strategy has made all the difference; it seems less daunting to sit down to write as I am not aiming to spend major time or make huge progress in each session. I worry less about the quality of the writing, since the point is to make progress through the story and get the 250 words down. I now find I am much more motivated, the story is coming along nicely and I am around 3,000 words in. 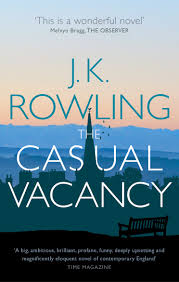 In common with other writers, when struggling to write, I often turn to reading since it seems like a constructive thing to do to get the creative juices flowing. I raced through J K Rowling’s novel for adults, The Casual Vacancy, and cannot recommend it enough. The characters are brilliantly written, provoking pangs of recognition in the reader as very British ‘types’ in what has been called a ‘state of Britain’ story, but also achieving depth, with convincing backstories and well developed motivation. The quaint, self-important town of Pagford is a brilliant invention and I found myself increasingly compelled to delve into the goings on there, as you are when you are hooked on watching soaps. The bitchy power struggle for a place on the council after the death of much-loved do-gooder Barry Fairbrother provokes a sequence of events that is darkly comical, but as you read on, you begin to feel that it is bristling with the potential for disaster. From the pompous burghers who run Pagford to the drug-addicted underclass who keep social services busy, every character convinced and fascinated me, the teenagers perhaps most of all. Most are so self-involved that by the end when darkness takes over events, the ‘casual vacancy’ of the title becomes an apt description for the place in a human heart where care for and interest in the plight of others should be.

My reaction to seeing the Harry Potter books on film was that the characters and scenes seemed to be almost exactly as I had imagined them from the printed page. Reading this adult novel, it struck me that J K Rowling’s genius is to create characters and scenes that spring to life in our imagination, and this works as well for the residents of a small town in up-to-the-minute Britain as it did for wizards in a half-magical world. I can just see the obese, self-satisfied Howard, the drug-addicted Terri and Fats, the Nietzsche-loving schoolboy.

You sometimes imagine that J K Rowling has taken her money and run away to the very remote, cloistered ivory tower of the successful writer, but The Casual Vacancy suggests that she hasn’t; from this evidence, she inhabits the same Britain as the rest of us, and she’s taking it all in.
Posted by Creaky door writer at 09:17